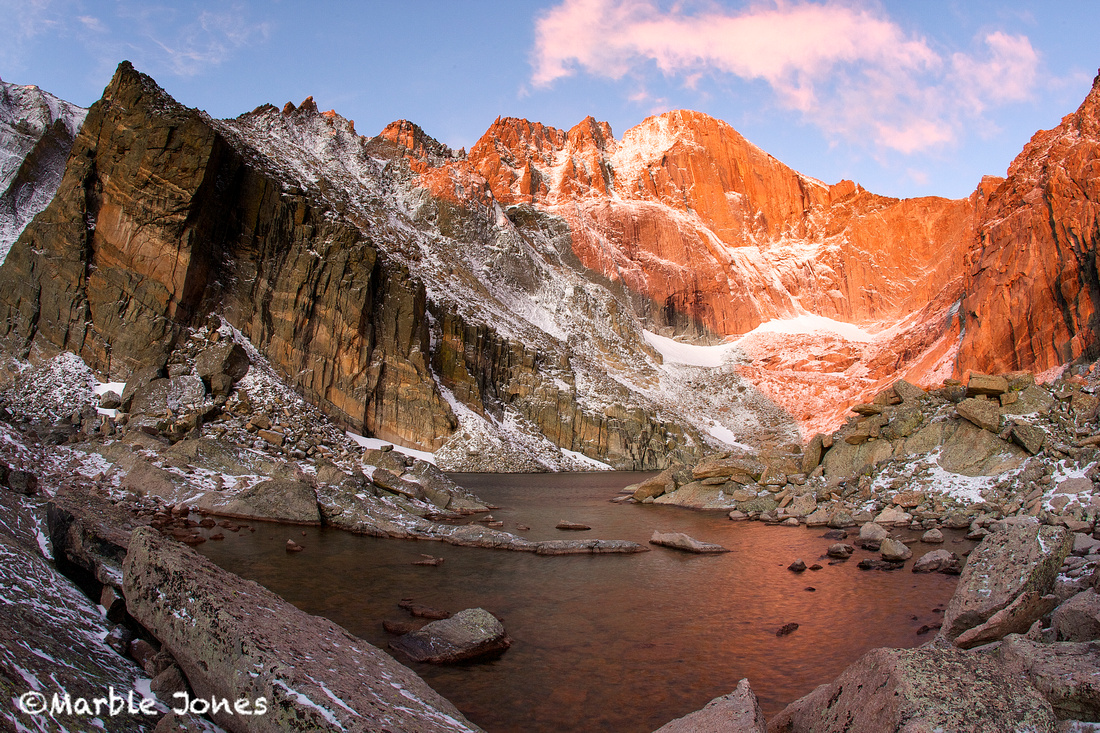 Winter begins to appear in the rockies.  After completing an all night hike/sunrise adventure two nights before, I normally would have been content to wait at least a week before the next adventure.  The rockies received some of it's first snow of the season so I was eager for the return to Chasm Lake (11,760') sitting at the base of Longs Peak (14,259').  The forecast looked perfect to make the 8.4 mile roundtrip so I began asking around for any other fools to make this trip with me.  The usual response is "have a safe trip and I'll look at your pictures later".  We have a new intern at work that just graduated from Tennessee and loves the outdoors.  Kara is eager to see the beautiful sights of Colorado.  Aside from climbing a fourteener in the last month, Kara has not adjusted to the hight elevations yet.  We left at midnight and reached the Longs Peak trailhead at 2:00 AM to an almost empty parking lot that is usually full by 1:00 AM.  I've been lucky in the past with the weather forecasts but the weather is constantly changing in the high country of Colorado.  Within minutes of beginning our hike it began spitting snow in our faces being guided in the dark by our headlamps.  By the time we reached timberline the wind was blowing the snow really hard in our face and sometimes throwing us off balance.  After four miles we reached a privy (11,638') that is known as one of the most scenic privies in Colorado.  At this point we used the walls as a shelter from the wind and blowing snow in preparation for making the final .2 mile scramble up the steep basin to Chasm Lake.  I think at this point Kara was wondering why she made the decision to come.  We made the final scramble in about 30 minutes arriving at Chasm Lake an hour and fifteen minutes early before sunrise.  It was so bitter cold in the wind we found shelter in the middle of some large boulders eating some snacks waiting for sunrise.  Just before sunrise the sky cleared and the wind died down considerably but sill blowing enough to create ripples on the water.  The sunrise was still incredible with golden light hitting Longs Peak and reflecting on Chasm Lake.  View more Colorado photos at http://www.marblejones.com/p459698259